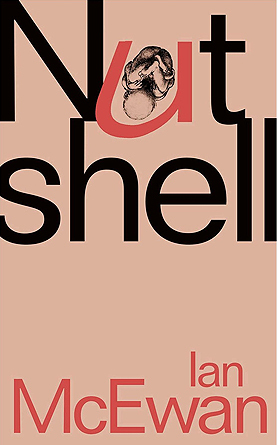 Hardback:199 pages.
Genre: Contemporary Literary Fiction.
Publisher: Jonathan Cape.
Source: Lent to me by a Book Club friend.
First Sentence: So here I am upside down in a woman.
Favourite Quote:“It's already clear to me how much of life is forgotten even as it happens. Most of it. The unregarded present spooling away from us, the soft tumble of unremarkable thoughts, the long-neglected miracle of existence.”
Review Quote: "An astonishing act of literary ventriloquism unlike any in recent literature. A bravura performance, it is the finest recent work from a true master… Told from a perspective unlike any other, Nutshell is a shocking tale of murder and treachery from one of the world’s master storytellers." (Daily Telegraph)
Main Characters: Baby Cairncross, Trudy, Claude, John.
Setting: London, UK.
Literary Awards: Goodreads Choice Award Nominee for Fiction (2016)

My Opinion:
This was a first for me. A story told from the viewpoint of the foetus in the womb of one of the protagonists, very clever.
The narrator is the unborn baby of Trudy, very close to the delivery date so able to hear but not see. From the restricted viewpoint the foetus speculates on everything he hears that is going on in the world that he is getting to know via his mother. Even a love and knowledge of good wines thanks to her, heavy drinking! He is very concerned about the world he is about to be born into and the fact that his mother and uncle appear to be involved in a murder plot.

Another great read from Ian McEwan which his many fans are bound to enjoy and appreciate the skill he has of making social criticism in his writing.


My previous reviews for  Amsterdam,   Atonement, On Chesil Beach,  Saturday and The Cement Garden were written for Bookcrossing  before this Book Review blog was in existence.

Nutshell is a classic story of murder and deceit, told by a narrator with a perspective and voice unlike any in recent literature. A bravura performance, it is the finest recent work from a true master.

To be bound in a nutshell, see the world in two inches of ivory, in a grain of sand. Why not, when all of literature, all of art, of human endeavour, is just a speck in the universe of possible things.

Ian McEwan’s works have earned him worldwide critical acclaim. He won the Somerset Maugham Award in 1976 for his first collection of short stories First Love, Last Rites; the Whitbread Novel Award (1987) and the Prix Fémina Etranger (1993) for The Child in Time; and Germany's Shakespeare Prize in 1999. He has been shortlisted for the Man Booker Prize for Fiction numerous times, winning the award for Amsterdam in 1998. His novel Atonement received the WH Smith Literary Award (2002), National Book Critics' Circle Fiction Award (2003), Los Angeles Times Prize for Fiction (2003), and the Santiago Prize for the European Novel (2004). Atonement was also made into an Oscar-winning film.

In 2006, Ian McEwan won the James Tait Black Memorial Prize for his novel Saturday and his novel On Chesil Beach was named Galaxy Book of the Year at the 2008 British Book Awards where McEwan was also named Reader's Digest Author of the Year. Solar won The Bollinger Everyman Wodehouse Prize for Comic Fiction in 2010 and Sweet Tooth won the Paddy Power Political Fiction Book of the Year award in 2012. Ian McEwan was awarded a CBE in 2000. In 2014 he was awarded the Bodleian Medal. On Chesil Beach and The Children Act have recently been made into feature films.

Posted by LindyLouMac at 6:05 PM