A sneak peek of the cover of The Girl Who Wouldn’t Die – the exciting debut novel from Marnie Riches.

The Girl Who Wouldn’t Die

When a bomb explodes at the University of Amsterdam, aspiring criminologist Georgina McKenzie is asked by the police to help flush out the killer. But the bomb is part of a much bigger, more sinister plot that will have the entire city quaking in fear.

A thrilling race against time with a heroine you’ll be rooting for, this book will keep you up all night!

Marnie Riches grew up on a rough estate in Manchester, aptly within sight of the dreaming spires of Strangeways prison. Able to speak five different languages, she gained a Master’s degree in Modern & Medieval Dutch and German from Cambridge University. She has been a punk, a trainee rock star, a pretend artist, a property developer and professional fundraiser. In her spare time, she likes to run, mainly to offset the wine and fine food she consumes with great enthusiasm.

I was invited to join this cover reveal today, something I have never participated in before on the blog. However as I was asked especially to do so I decided why not.

I will of course be reading the novel and reviewing here at a later date as well.
Posted by LindyLouMac at 2:14 PM 7 comments:

The Separation by Dinah Jefferies 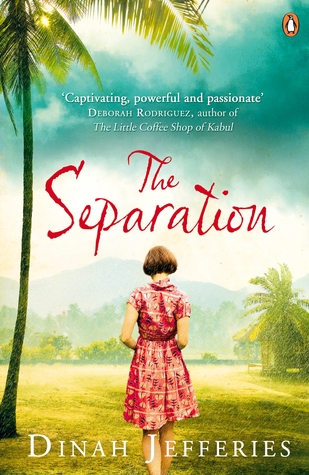 Paperback: 383 pages
Genre:  Historical Romantic Fiction.
Publisher: Penguin 2014
Source: Tywyn Public Library
First Sentence: The man smoothed down the lion's paws with a sponge he'd dipped in a bucket of water, then withdrew a knife from a leather pouch at his waist.
Review Quote: 'The tears are still streaming down my face ... I have three words to describe the book: Captivating, Powerful and Passionate.'
Deborah Rodriguez - author of 'The Little Coffee Shop of Kabul'.
My Opinion: A captivating début.


This début novel which I picked up recently at my local library, was as captivating as the blurb on the cover led me to believe it would be. Dinah Jefferies spent her own childhood in Malaya and was there at the time of the Emergency that took place there in the 1950's. The novel is set in this period and she freely admits that although the characters are imaginary she has of course drawn on her own experiences. It is these memories, plus her mothers memoirs and photographs that have helped make this novel feel so authentic in its 1950's setting. If you want to know more about the background I recommend you read the author's note at the end of the novel.

A heartbreaking story, as the novel opens it is Malaya in the mid fifties and Lydia Cartwright returns home from visiting a friend to find her home is deserted. Her husband, Alec and their daughters Emma and Fleur are not there. To make it worse the phone is dead and the servants have also disappeared. Lydia contacts her husband's boss only to be told he has been sent into the jungle on a posting. She cannot understand why her husband has departed without her and not even left her a message. Setting off on a dangerous journey through the war torn area to catch him up, she has to turn for help to a friend from her past, Jack Harding. Not a good idea as he is a man she had vowed to leave in her past, however she is prepared to sacrifice everything to be reunited with her family.
Lydia has secrets but she is about to face much worse a devastating betrayal! Encouraging you to read this for yourself, without spoilers is my policy, when writing reviews.

Highly recommend this new author to readers that enjoy fairly contemporary historical fiction and those that like to be transported to foreign shores. I am already looking forward to reading The Tea Planter's Wife which is due for publication in August 2015.

Dinah was born in Malaya in 1948 and moved to England at the age of nine. In 1985, the sudden death of her fourteen year old son changed the course of her life, and deeply influenced her writing. Dinah drew on that experience, and on her own childhood spent in Malaya during the 1950s to write her début novel, The Separation.  She has worked in education, once lived in a 'rock 'n roll' commune and, more recently, been an exhibiting artist
Now living in Gloucestershire with her husband and slightly overweight Norfolk terrier, she spends her days writing, with time off to make tiaras and dinosaurs with her grandchildren.

I am not sure if this video will work here, but if not do visit the Amazon Profile Page where it can be viewed. Well worthwhile if you need further tempting to read and there are no spoilers.

Posted by LindyLouMac at 9:24 PM 4 comments:

Summer at the Lake by Erica James

I have been enjoying Erica James writing since 1996, so definitely consider myself a long time fan of her particular brand of escapism.  Contemporary romantic fiction with characters that one can often identify with people you come across in real life. This time set in Oxford and Lake Como both places I was instantly transported to with the authors realistic descriptions.

The three protagonists of the novel meet in dramatic circumstances right at the opening of the story. A group of individuals thrown together by fate Floriana, Esme and Adam find themselves surprisingly becoming firm friends. Florianna is involved in an accident and it was Esme and Adam that had rushed to her aid.
As the relationships develop between this unlikely group the life stories of the three of them unfolds. The three had kept in touch after the accident and found despite the fact that they were all so different that there was a strong connection concerning relationships and broken hearts. It seems as if they are all going to be of help to each other with regards putting their pasts to rest. Woven together seamlessly the characters stories made for a very engrossing read.

In conclusion then if you are looking for contemporary fiction that is pure escapism then Erica James will satisfy your requirements. According to the Guardian  Summer at the Lake was one of the 100 best-selling books in 2014.

I have reviewed some of her earlier novels on the blog. They are Tell It To The Skies,  It's The Little Things,   Hidden Talents, The Hidden Cottage and  The Real Katie Lavender

Erica James, née Sullivan was born in 1960 in Surrey, England, UK and she grew up on Hayling Island, Hampshire from the age of 4.  Now divorced, with two grown-up sons, Edward and Samuel, she divides her time between Suffolk, UK and Lake Como, Italy

She began writing after attending a creative writing course at the Arvon Foundation, and published her first novel in 1996. In 2006, her novel Gardens of Delight won the Romantic Novel of the Year Award from the Romantic Novelists' Association. Erica James  is the author of sixteen best selling novels including her most recent, The Real Katie Lavender.

Apparently she has an insatiable appetite for other people's business and will readily strike up a conversation with strangers in the hope of unearthing a useful gem for her writing. She finds it is the best way to write authentic characters for her novels, although her two grown up sons claim they will never recover from a childhood spent in a perpetual state of embarrassment at their mother's compulsion.

Posted by LindyLouMac at 8:11 PM 8 comments: