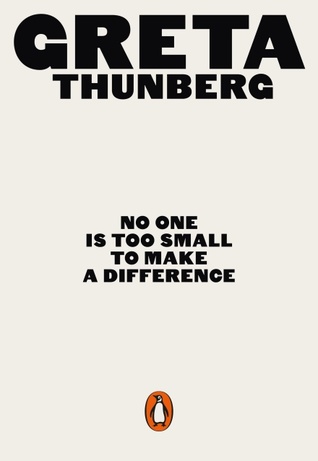 Genre: Non-Fiction
Publisher: Penguin Books 2019
Source: Amazon
First Sentence: Last summer, climate scientist Johan Rockstrom and some other people wrote that we have at most three years to reverse growth in greenhouse-gas emissions if we're going to reach the goals set in the Paris Agreement.
Favourite Quote: “Homo Sapiens have not yet failed. Yes, we are failing, but there is still time to turn everything around. We can still fix this. We still have everything in our own hands.”
Review Quote: The speeches of a young climate crisis activist who inspired global school strikes are sobering but tentatively hopeful. The Guardian Newspaper
Main Characters: Greta Thunberg
My Opinion: A little book of just 68 pages but with a huge message. It contains the content of the speeches that Greta has now repeated many times.

Not enough notice is being taken because of who she is and what she represents, however she is only repeating the facts she has learnt from the scientists.

About time some serious action was taken for the sake of future generations.

If you are not already aware of what this exceptional young lady has to say, then it is time you were!


The history-making, ground-breaking speeches of Greta Thunberg, the young activist who has become the voice of a generation

'Everything needs to change. And it has to start today'

In August 2018 a fifteen-year-old Swedish girl, Greta Thunberg, decided not to go to school one day. Her actions ended up sparking a global movement for action against the climate crisis, inspiring millions of pupils to go on strike for our planet, forcing governments to listen, and earning her a Nobel Peace Prize nomination.

This book brings you Greta in her own words, for the first time. Collecting her speeches that have made history across Europe, from the UN to mass street protests, No One Is Too Small to Make A Difference is a rallying cry for why we must all wake up and fight to protect the living planet, no matter how powerless we feel. Our future depends upon it. 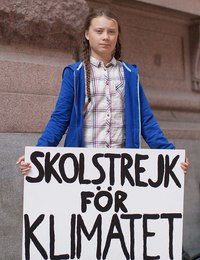 Greta Thunberg, born January 3rd 2003, is a Swedish schoolgirl who, at age 15, began protesting outside the Swedish parliament about the need for immediate action to combat climate change and has since become an outspoken climate activist.

She is known for having initiated the school strike for climate movement that formed in November 2018 and surged globally after the United Nations Climate Change Conference (COP24) in December the same year. Her personal activism began in August 2018, when her recurring and solitary Skolstrejk för klimatet ("School strike for the climate") protesting outside the Swedish parliament in Stockholm began attracting media coverage, even though Sweden has already enacted "the most ambitious climate law in the world" – to be carbon neutral by 2045.

On 15 March 2019, an estimated 1.4 million students in 112 countries around the world joined her call in striking and protesting. A similar event involving students from 125 countries took place on 24 May 2019.

Thunberg has received various prizes and awards for her activism. In March 2019, three members of the Norwegian parliament nominated Thunberg for the Nobel Peace Prize. In May 2019, at the age of 16, she featured on the cover of Time magazine. Some media have described her impact on the world stage as the Greta Thunberg effect.

Posted by LindyLouMac at 4:20 PM No comments: