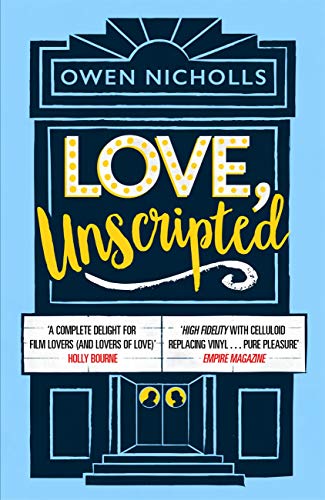 Paperback: 373 pages
Genre: Romantic Comedy
Publisher: Headline Publishing, August 2019
Source: Headline Publicity, Advanced Proof Copy.
First Sentence: When we were eleven, Leon Woodward told me about his plan to kiss Sally Carter.
Review Quote: High Fidelity with celluloid replacing vinyl - an astutely observed romantic comedy that had me shaking with laughter and sniffing away tears. Pure pleasure. (Nev Pierce, Contributing Editor EMPIRE Magazine)
Main Characters: Nick Marcet and Ellie Brown.
Setting: London, England.
My Opinion: Owen Nicholls debut in the world of romance is a romantic comedy with many classic film references. The latter of which were mainly lost on me although I do enjoy modern cinema.  Excited to be given the opportunity to read and review the paperback edition before publication by Headline Publicity I was disappointed when it did not meet my expectations, especially with the apparent current revival and popularity in romantic comedies.
Although the story is at times warm and funny, for me this is just another love story, where the protagonist a film projectionist is trying to understand what the difference is between his passion for love on the big screen and the reality of his own love life.
The style is in my opinion reminiscent of Nick Hornby so if you enjoy his writing you will probably enjoy this.


For film projectionist Nick, love should mirror what he sees on the big screen. And when he falls for Ellie on the eve of the 2008 presidential election, it finally does.
For four blissful years, Nick loved Ellie as much as he loved his job splicing film reels together in the local cinema. Life seemed... picture-perfect.
But now it's 2012, Ellie has moved out and Nick's trying to figure out where it all went wrong.
With Ellie gone and his life far from the happy ending he imagined, Nick wonders if their romance could ever again be as perfect as the night they met.
Can love really be as it is in the movies?

Owen Nicholls is a screenwriter with a Masters in Scriptwriting from the University of East Anglia. His work has appeared in both Empire and the NME and earlier this year 'Love Unscripted' was selected for the Escalator Scheme run by the Writers Centre in Norwich. He lives in Norfolk with his partner and their two sons.


Photograph and Biographical Information courtesy of the following sites.