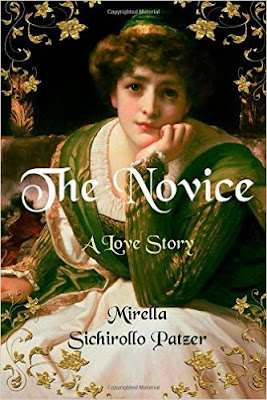 Paperback: 363 pages
Genre: Historical Fiction
Publisher:  History and Women Press 2014
Source:  The author in return for an honest and unbiased review.
First Sentence: The massacre caught the villagers of Gaeta by surprise.
My Opinion: This is the third novel I have read by Mirella Patzer and I have enjoyed them all. I do not read a great deal of historical fiction but I was drawn in to this love story set in 10th century Italy. I love Italy as does this author and it shows in her writing. An intense love story with secrets and passion to keep you entertained.
I can recommend this to any reader that enjoys historical fiction and the fact it is set in Italy means that this novel will probably also appeal to many Italophiles.


Other titles by Mirella Patzer read and reviewed on LindyLouMac's Book Reviews.

Orphan of the Olive Tree


Précis of The Novice courtesy of Amazon

A young woman on the verge of taking her vows to become a nun. A desperate flight from a murderous massacre. One honourable man comes to her rescue. Another becomes her nemesis and captor. And a life and death search to reunite with her one true love. In 10th century Naples, Saracens run rampant, annihilating villages, murdering women and children. Death and despair is everywhere. Alone in the world, Sara is a young novice plagued with doubts about taking her final vows to become a nun. When her convent is attacked, she flees for her life straight into the arms of a group of Saracens who leave her to die alone in the woods. An honourable cavaliere named Nicolo comes to her rescue and offers to take her to the safety of Naples. As they journey together, they are irresistibly drawn to each other. Believing Sara to be a nun, the honourable Nicolo is torn between love and duty to respect her vows. Heartbroken, he does what honour demands and sets her free before she can tell him the truth that she is not a nun. In her search to reunite with Nicolo, she encounters Umberto, a dark and dangerous man who will stop at nothing in his obsession to possess her. With her sharp intellect, and her heart, Sara must rely on her own courage and strength to escape her abuser and find the only man she will ever love. A story that burns with intensity, intrigue, and passion from the author of the highly successful novel, Orphan of the Olive Tree.

Mirella Sichirollo Patzer writes sweeping historical novels set in exciting periods of history. From the medieval eras to the early 18th century, her novels feature intriguing characters and fascinating heroines. Her favourite setting is Italy, for that's where the root of her passion lies because of her strong Italian heritage, but she has also written about early Canada and medieval Germany. As well as writing historical fiction she is also an avid reader of the genre.
First generation Italian/Canadian, Mirella was born in Edmonton, Alberta, Canada, but grew up in Calgary, a city famous for the Calgary Stampede, oil companies, and the wild west. She attended the University of Calgary where she specialized in leadership and human resources. She has worked as a bilingual secretary, police radio operator, and manager. She loves a clean orderly house but hates housework, detests winter, and is a mild claustraphobic. She has a passion for books, cooking, writing, and a good helping of her home-made tira-mi-su. She lives in Cochrane, Alberta, with her husband and family.


Photographs and biographical information courtesy of the following sites.