The Deal by Tony Drury 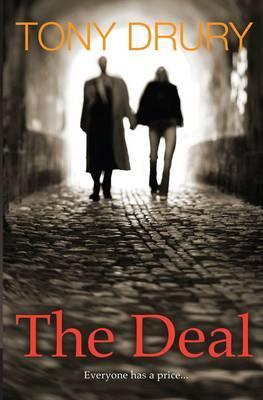 Paperback: 248 pages
Genre:Romantic thriller
Publisher: City Fiction 2012
Source: The author's publicist in return for an honest and unbiased review.
First Sentence: Ascent...yes, ascent, he pondered, as he quietly relayed the melody in his mind.
My Opinion: Having thoroughly enjoyed Megan's Game the debut novel from this author, I was delighted to be given the opportunity to read and review The Deal his second novel.
This is a romantic thriller, a genre appeals to many, an easy read that keeps you turning the pages as the plot builds. The setting in the financial district and a publishing house I found of particular interest.

The pressure is on for corporate financier Oliver Chatham. As the City languishes in recession, he is under contract to raise two million pounds for a publishing company.
But it’s not only money at stake – if he is successful, Amanda Wavering, woman of his dreams and sister of the publishing house’s chief executive, will consummate their relationship; if he fails, no deal.
As if this wasn’t challenge enough, Oliver’s finance house becomes caught up in a battle of ferocious egos, as new bloods battle with the old guard for the future of the business. While old school boss Charles Harriman fights his own demons and the terrifying kidnap of his child, fearless corporate researcher Sara Flemming takes her reputation – and her life – right to the edge in her bid to expose the dodgy dealings of a Russian mafioso.
Will Oliver get what he bargained for – or will he learn the hard way that you should never mix sex and the City? 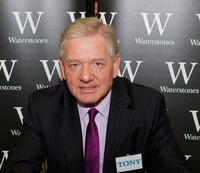 Biography in the Author's own words, Courtesy of Goodreads.

I was born in Birmingham and being the son of a Bank Manager I started my career in banking. In the 1960′s job security was very important. I joined the Midland Bank, Kidderminster, where I married the manager’s secretary Judy.

I was transferred to a Birmingham branch and from there my career changed. I joined a Secondary Bank much to the dismay of my parents.

In 1973 I was moved to London and promptly ran into the Secondary Banking Crisis and did well to keep my job I realised I was intellectually limited (ok: thick), so I wrote the text book on Finance Houses. It was published by Robert Maxwell who offered me a job as Managing Director of Waterlow Publishers. A year later he told me to “f**k off”, but he paid my contract.

The next ten years were spent building up a financial publishing company which went onto the stock market. I managed to buy the local squash club as well. I also had partnerships in a print company and a design studio. This experience was all very helpful in my career at the present time.

By now, I had written six financial books, the best being ‘Investment Clubs: the low risk way to stock market profits’, which was sponsored by Barclays Stockbrokers and sold 25,000 copies.

I set-up ‘ProShare’ in the early 1990′s to help shareholders form Investment Clubs.

St. Helen’s Capital was born in 1998 and by 2006 I had built it into the most successful PLUS Markets advisory firm.

I sold out of St. Helen’s in 2006 and promptly walked into the latest recession which virtually wiped me out.

I am still married to Judy (pictured). We have a son Chris and a daughter Emma, a son-in-law Simon (a barrister) and a daughter-in-law, Samantha. Chris and Samantha have now given us our first grandchild, Henry, who is the most gorgeous baby ever and I love him to bits.

I worked hard for the Conservative Party and was an Association Chairman and a County Councillor. I left when David Cameron betrayed the Party by entering into a totally unnecessary Coalition with the Lib-Dems (minority Government was staring him in the face). However, I have now rejoined in support of Andrew Selous, our local MP.

On my 60th Birthday, I decided I needed a new hobby, something a bit less energetic. I started writing fiction, mainly because I’ve spent most of my life telling stories. ‘Megan’s Game’ was my first book, which took five years to write and it was published in May 2012, followed by ‘The Deal’ in October 2012 and then ‘Cholesterol’ in June 2013. Very excited that my fourth novel ‘A Flash Of Lightning’ was released on the 21st November 2013 and most recently, 'The Lady Who Turned' was published in September 2014.

A bit of luck came my way and some producers who had read ‘Megan’s Game’ said they would like to make it into a film……..The script is now written and the film will be released in 2014. The producers loved the locations, Aberdovey in Wales, the City of London and the South of France.

Another film company in London has just bought the rights to my fourth novel 'A Flash Of Lightning' and is currently in development.

The Devil in the Marshalsea by Antonia Hodgson 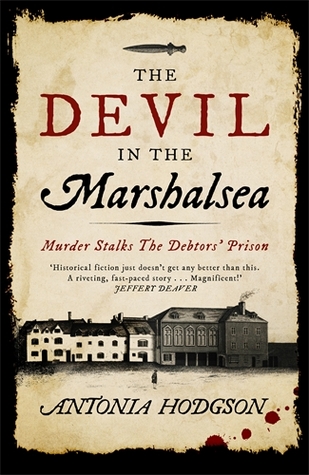 Hardback:  384 pagesGenre: Historical Fiction, MysteryPublisher: Hodder and Stoughton 2014Source: Tywyn Public LibraryFirst Sentences: They came for him at midnight. there was no warning, no time to reach for the dagger hidden beneath his pillow.
Favourite Quote: “I had an appointment with a ghost. It seemed impolite not to attend.” Favourite Quote: I opened my mouth to reply, but could not think what to say. How could I sit at supper and describe what I had witnessed to a pair of innocent young ladies? A boy of thirteen beaten to death: rotten corpses teeming with rats; waking to find my friend with his throat cut, the life stolen from his bright black eyes.(The second quote is not exactly a 'favourite' but this quote was to me the heart of this story, not for the faint hearted.)
Literary Awards: Crime Writers Association - Historical Dagger Award

My Opinion: I enjoy reading historical fiction but that combined with a murder mystery, meant that this is a book I would never have picked up to read had it not been a Bookclub choice. Now having finished it, I have to admit that it was better than I anticipated. The period details and setting are meticulously described and I shuddered more than once as I was transported inside the debtors prison of the C18. The novel is set over just a period of a few days that the protagonist Tom Hawkins spends in this infamous jail. Based on actual events, with characters drawn from real people, everything described is based on first hand accounts from publications of the era. Certainly not for the faint hearted, some of the descriptions are particularly savage. If you have the stomach for such graphic detail and enjoy a mystery then this is one for you.


'The Devil in the Marshalsea' Précis Courtesy of Goodreads

London, 1727 - and Tom Hawkins is about to fall from his heaven of card games, brothels and coffee-houses to the hell of a debtors' prison.

The Marshalsea is a savage world of its own, with simple rules: those with family or friends who can lend them a little money may survive in relative comfort. Those with none will starve in squalor and disease. And those who try to escape will suffer a gruesome fate at the hands of the gaol's ruthless governor and his cronies.

The trouble is, Tom Hawkins has never been good at following rules - even simple ones. And the recent grisly murder of a debtor, Captain Roberts, has brought further terror to the gaol. While the Captain's beautiful widow cries for justice, the finger of suspicion points only one way: to the sly, enigmatic figure of Samuel Fleet.

Some call Fleet a devil, a man to avoid at all costs. But Tom Hawkins is sharing his cell. Soon, Tom's choice is clear: get to the truth of the murder - or be the next to die.


A twisting mystery, a dazzling evocation of early 18th Century London, THE DEVIL IN THE MARSHALSEA is a thrilling debut novel full of intrigue and suspense. 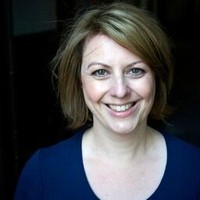 Antonia Hodgson was born in Derby in 1971. She attended Littleover Community School where she first studied the time of the early Georgians in A-level History. She graduated with a degree in English Literature from Leeds University in 1994 and she went to work for Harcourt, Brace.

Hodgson had spent nearly twenty years in the publishing business rising to editor-in-chief at Little, Brown before she published her own first novel. As an editor she had worked with Ozzy and Sharon Osbourne and the American novelists Nora Roberts and Elizabeth Kostova. Hodgson's first novel, A Devil in the Marshalsea, was set in the time of the early Georgians, William Hogarth and the Southwark prison the Marshalsea. Hodgson believes that the Georgian period was more intriguing than the Victorian era which is usually considered to be more culturally important. The book was submitted anonymously to the publishers, Hodder & Stoughton, because she was known in the publishing industry. Her first book won the Crime Writers Association's Historical Dagger award as well as being long listed for a first novel award
The Devil in the Marshalsea her debut novel, is  the first in a series to include the protagonist Tom Hawkes. The second in the series The Last Confession of Tom Hawkins was published earlier this year.  The author  lives in London.

Photograph and biographical information courtesy of the following sites.

Posted by LindyLouMac at 9:56 PM No comments: