The Perfect Match by Katie Fforde 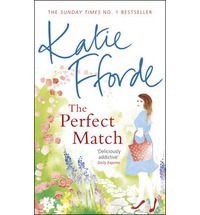 Hardback: 357 pages
Genre: Contemporary Romantic Fiction
Publisher: Century 2014
Source: Tywyn Public Library
First Sentences: Bella Castle took a breath and put on a smile she hoped would hide her frustration.
Review Quote: “A lovely sit-back-and-relax number that whisked me from my poky London flat to the rolling Cotswold hills … twenty novels in and Katie Fforde has still got it.”
Daily Express
My Opinion: Perfect relaxation reading.

Regular readers of my reviews may remember that I admit to having been a fan of Katie Fforde's writing since 1995. Picking up her latest novel is always a guarantee of finding a story to provide one with perfect relaxation reading, romantic plots with a feel good factor.  'The Perfect Match' is her twentieth romantic contemporary novel written in her inevitable warm and witty style with the sort of  ending one has come to expect! Cannot say that this was a favourite though as it felt superficial with no depth to the storyline, although I did enjoy the characterisations, particularly of 'wimpy' Bella and 'fiesty' Alice. Bella irritated me no end with her behaviour, yet Alice I admired, maybe as being of a similar age I thought go for it girl!

I will just give you a brief synopsis of the storyline, to tempt you to pick up 'The Perfect Match' if this is a genre you enjoy. The female protagonists are Bella and Alice, the former is Alice's god-daughter and they share a delightful home together in the Cotswolds. Bella had moved in with her god-mother three years previously when she left her home town after a disastrous affair, if one could call it that. Now successfully working as an estate agent in the area and dating her boss, Bella may well have thought she was settled but the balance is about to be upset. She finds her boyfriend is not all she thought and her ex love turns up in the village! As for Alice, in contrast to Bella a much more likeable character, still single at 60 she suddenly finds herself falling for a younger man after a chance meeting. Alice finds the situation difficult especially when she has to meet her lovers adult children, but she is a strong lady, who proves it does not matter how old you are when you fall in love.

To say more would spoil the story line, so I just recommend to Katie Fforde fans and fans of the genre if you have not yet discovered her writing. Her novels are perfect for when you are in the mood for a touch of romance, presented in a readable novel with the inevitable happy ending that one can relax with.

Catherine Rose Gordon-Cumming was born on 27 September 1952 in Wimbledon, London, UK.  She has lived near Stroud, Gloucestershire  for over twenty years, with her husband and three children. It was after the birth of her third child that she started writing using her married name of Katie Fforde.  She is founder of the Katie Fforde Bursary for writers who have yet to secure a publishing contract. She was for many years a committee member of the Romantic Novelists' Association and was elected its twenty-fifteenth chairman (2009–2011) and later its fourth president. In June 2010 she was announced as a patron of the UK's first National Short Story Week.

I am also sharing here what she has to say about herself on her website as she says it so well.

About Katie
I was born and brought up in London but I am basically a country girl. I’ve lived in Stroud with my family for thirty years and while I love London and visit it frequently, I don’t think I could actually live there.

My husband Desmond and I started married life on the water, where we took two 70’ x 6’10 narrowboats around the canals as a hotel. It was very hard work! From there we went to Wales where we had two baby boys and narrowly avoided keeping goats. It was while we lived in Wales that I became addicted to Mills & Boon novels. My husband was away at sea for a lot of the time, leaving me with two small children who didn’t sleep well. I loved the fact that you could pick up a Mills & Boon and be able to follow the plot and enjoy the escapism even if you’d had little sleep. They were my reward for every household task. I’m so glad I was addicted to reading and not chocolate or Valium.

I did have the idea that I wanted to write Mills & Boon novels but didn’t do anything about it until my mother gave me a writing kit for Christmas. By now we lived in Stroud, and I also had a daughter as well as the two sons, Irish Wolfhound and two cats we had in Wales (although not the hens.). I didn’t think I had time to write but my mother thought differently and I took up the challenge. Ten years later I had a book on the shelves. It wasn’t a Mills & Boon, although I had tried to write one for eight years; it was Living Dangerously.

I had met an agent through the Romantic Novelists’Association and, when I was about to give up my ambitions to become a writer, she convinced me I could write something else. I was extremely lucky that the novel was chosen as part of a WHSmith’s Fresh Talent promotion, which gave it a terrific start in life.

There have been over seventeen novels since, as well as some grandchildren and a few stone of extra weight. However, I love being a writer. It gives me the chance to have all the jobs I couldn’t get now even if I did know anything about horses or pottery or indeed almost anything else. I love doing the research, although it has taken me way out of my comfort zone at times. I have been a porter for an auction house, learned how to gut fish, and taken part in a Ray Mears survival course. I loved it!

My hobbies, when I have time for them, are singing in a choir and flamenco dancing. Watching television is research and so I call it work.


The biographical information photo and video used in this post are with thanks to the following websites, where you can also find more information about the author and her writing.

How To Be A Good Wife by Emma Chapman 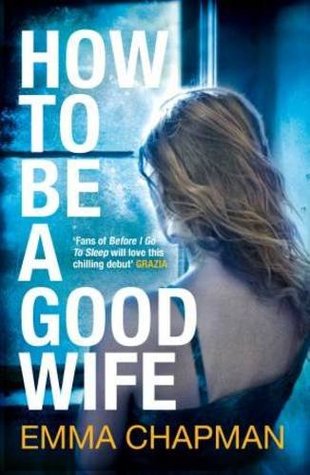 Paperback: . 273 pages
Genre: Psychological Thriller
Publisher: Picador - April 2014
Source: Lovereading Reviewer Panel
First Sentences: Today, somehow, I am a smoker. I did not know this about myself. As far as I remember, I have never smoked before.
Review Quote: ‘On the surface the book is a highly competent, creepy little chiller, but beneath, like a silent, bolted and half-dark room, there’s a much bigger, equally disconcerting story about the nature of feminine experience. It’s an accomplished début from a writer who shows insight and emotional power’. Hilary Mantel, Man Booker Prize winning author of Wolf Hall.
My Opinion: Completely lacking in storyline and tension.

I cannot say this was a boring novel as it was far from that, in fact it is an extremely erudite début from an obviously talented young lady. However it was just not for me, I found no pleasure in reading this novel and probably should not have done so, but I do like to keep my reading material eclectic!  When I was offered the opportunity to read this I had expectations of it being along the lines of Room which I really loved. So I was extremely disappointed to discover that to me, as I know I am in the minority, this was completely lacking in storyline and tension. The character of Marta, just annoyed me, maybe I missed the point and she was meant to and as for Hector, well I thought he was a horrid man! Let me give you a brief synopsis and you can decide for yourself if this thriller is for you.

Marta is married to Hector, twenty years her senior and the man who apparently helped her through a traumatic time during her teens and then eventually took her as his wife. The relationship seems extremely cold and unloving to the reader with Hector controlling her every move. She is not allowed to venture beyond the limits of the village they reside in and has to take medication deemed necessary for her well being by her husband. It is her decision to stop this medication that leads to Marta, starting to recall little by little a past life. Or maybe this is all in her imagination after all? Deliberately vague in the telling the reader is ultimately left to make up their own mind.

As I am very much in the minority with my thoughts on 'How To Be A Good Wife' I am not able to recommend it to you but hope that my review will help you make a considered choice, if this is a genre you normally enjoy.

Emma Chapman was born in 1985 and grew up in Manchester. She studied English Literature at Edinburgh University, followed by a Masters in Creative Writing at Royal Holloway, University of London. After university, she travelled in Scandinavia, and she currently lives in Perth, Western Australia. How To Be A Good Wife is Emma's first novel.

Posted by LindyLouMac at 7:22 PM No comments: