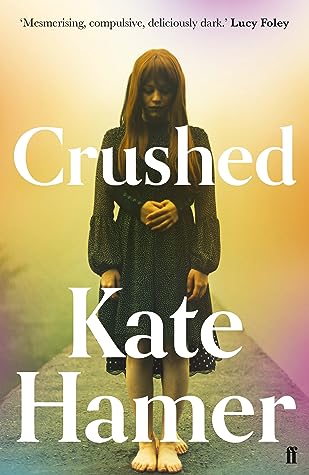 First Sentence: It was a book full of hate.

Review Quote:  As Hamer's eerie, atmospheric novel unfolds, she skillfully recasts Shakespeare's witches as her three teenage leads in a novel that is as much about family dysfunction, burgeoning sexuality and abuse of power as it is about teenage mysticism...Hamer writes beautifully about the complex and shifting dynamics between adolescent female friends. As Phoebe, believing herself to be as powerful as one of the witches in Macbeth, entices her friends into ever more perilous territory, Hamer brings the novel to a startling and powerful conclusion. Crushed is a richly imagined novel about the fine line between teenage friendship, passion and obsession. ― The Observer

My Opinion: Kate Hamer has a very particular style of writing and I must be honest and say it has grown on me. As when I read her debut novel in 2017, 'The Girl in the Red Coat' for my Book Club and I found the writing to be of a high standard but rather dark for my taste. Later that year I attended a Literary Dinner where Kate Hamer was one of the speakers. She gave an interesting talk and I began to understand more her writing. When she writes she obviously enjoys immersing herself in haunting, dark psychological tales, not my favourite genre but I enjoy her novels due to the atmosphere she creates allowing one to become captivated.

If you are a fan of this genre, this creepy story will enthrall you. Three teenage girls, Grace, Orla and Phoebe, the latter is obsessed with Macbeth, to the conclusion of labelling herself a witch. Their intense relationship certainly pushes their friendship to the limit.

Phoebe stands on Pulteney Bridge, tights gashed from toe to thigh. The shock of mangled metal and blood-stained walls flashes through her mind as she tries to cover her face so she won't be recognised. It wouldn't do to be spotted looking like this. She's missing a shoe. She feels sick.

Phoebe thought murder and murder happened. Thoughts are just thoughts, they said. Now she knows they were wrong.

At home, Phoebe arranges the scissors and knives so they point toward her mother's room. She is exhausted, making sure there's no trace of herself - not a single hair, not even her scent - left anywhere in the house. She must not let her thoughts unravel, because if they do, there's no telling who might be caught in the crossfire, and Phoebe will have to live with the consequences. 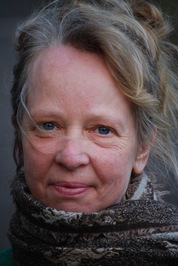 Kate Hamer's third novel CRUSHED was published in May 2019 (Faber & Faber). She is the author of THE DOLL FUNERAL (Faber & Faber 2017) which was a Bookseller book of the month and an editor's pick for Radio 4's Open Book. Her first novel THE GIRL IN THE RED COAT has been translated into 18 different languages. It was shortlisted for The Costa First Novel Prize, the British Book Industry Awards Debut Fiction Book of the Year, The John Creasy (New Blood) Dagger and the Wales Book of the Year. It was a Sunday Times bestseller. She grew up in the west country and rural Pembrokeshire and now lives with her husband in Cardiff.

Posted by LindyLouMac at 8:03 PM No comments: