The Return by Victoria Hislop

The first part of this novel certainly does not prepare you for the later intensity as suddenly the story takes on a complete change of tone and direction when we are transported back to the Granada of the nineteen thirties. It is a gentle start as this first part is set mainly in modern day Granada with Sonia and Maggie.  Two fans of salsa from the UK where they take regular classes, the young women spend a few days in Granada taking dance lessons as a birthday treat for one of them. While there Sonia became friendly with an elderly gentleman when she found the photographs displayed in his cafe fascinated her, leaving her finding she wanted to know more.

Part Two and it is 1931 the second republic with the promises of an end to poverty has just been formed and the protagonists are the Ramirez family of Sonia’s cafe photos. The story now moves to the Spanish Civil War and how it altered the lives of those living in Spain for ever, as told to Sonia by Miguel, the elderly gentleman she met in the previous part. El Barril the bar where Sonia first met Miguel was home to the Ramirez family whose experiences he is now relating to her. The parents Concha and Pablo, plus their three sons Antonio, Ignacio, Emilo and daughter Mercedes. In this conflict it was sometimes hard to say if anyone was completely without blame, whether Nationalists or Republicans. With two of the brothers firmly on opposing sides life is very uncomfortable for the family in Granada, which although in Nationalist hands harboured a strong undercurrent of support for the Republicans. Franco’s desire was to wipe the Republicans off the face of the earth whatever it took.

Part Three returns us to modern day Spain of 2001 as Miguel reads letters to Sonia that Mercedes wrote to her mother once it was safe to do so. Thereby bringing the emotional family story up to date for her. There were maybe one to many coincidences that tied up the ending too neatly for me, I mean the chances of this happening in real life are just so extreme, but then this is a novel and such endings are allowed.

A poignant story that is very well written and extremely enjoyable if not a little harrowing at times.  I learnt not just about the terrible effects of The Civil War in Spain but also about bull fighting and flamenco dancing.                       This is the second novel that Victoria Hislop has had published, both of which I have read and enjoyed. An author whose work I will certainly look out for again, as last time I learnt about leprosy in The Island and this time The Spanish Civil War, so much more than the romance that was also present in both novels.

This video gives nothing away, but the music will put you in the mood to read the novel. 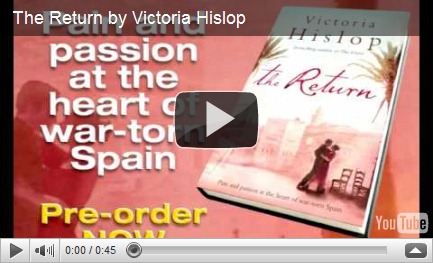 If you would like to learn more about what actually  inspired Victoria Hislop to write The Return then do take ten minutes to listen to this interesting video I found on YouTube, which is fascinating and does not contain any spoilers 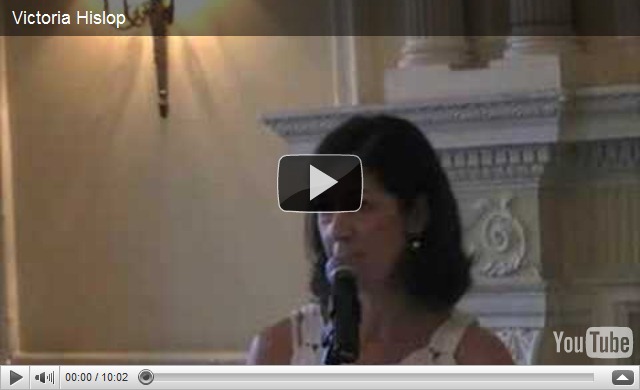 Also worth mentioning is the fact that The Island has been made into a television series for Greek television, you can read more about that on the authors Official Website. Where you will also  find although given two years ago, a transcript to an interview she gave here. I was amused to learn some completely irrelevant but interesting facts such as her favourite male film star, ( she should watch my Italian ads posted on News From Italy) and who her famous husband is. Maybe some of you already knew this.

I seem to have got a little carried away with additional author information in this post today, but when I enjoy an author’s work I am also fascinated to learn more about the person behind the stories.

Posted by LindyLouMac at 3:32 PM