Woman of a Certain Rage by Georgie Hall

Hardback:  436 pages
Genre: Contemporary Fiction
Publisher: Head of Zeus, July 2021
Source: LoveReading Consumer Reader Review Panel Member
First Sentences: Our dog Arty died a fortnight ago. She was sixteen, which is over ninety in dog years, the young vet told us kindly when he came to put her down.
Review Quote: 'Beautifully written and smart as a whip, this is a funny and truthful novel about love and life past the big five-0. Hall has created a character that mid life readers can not only root for but identify with too' Mike Gayle.

My Opinion:  'Woman of a Certain Age' is the debut novel of Fiona Walker's alter ego Georgie Hall. As Fiona she writes multi character comedies, to my surprise I have only read one and that was in 1994, 'French Relations', her first published novel. Maybe I should rectify this!

Writing as Georgie she has produced a witty portrayal of the menopause, motherhood and marriage. The moral of this delightful read, set in the beautiful countryside surrounding Stratford upon Avon, is to make sure you shake your life up and don't on any account let the menopause drag you down.

Although we may not all experience such menopausal adventures as the protagonist Eliza, many readers will certainly identify with the real life scenarios, the marital ups and downs, teenage angst, autism and the death of a much loved family pet.

Some women suffer badly during the menopause, but many others don't, so if you read this and you are pre-menopausal just don't assume Eliza is the norm! Remember this is a comic romp and should not be taken too seriously. Recommended if you want a funny, mainly authentic and fairly light hearted read.

A smart and funny novel about love, life, and a second shot at freedom for rebellious women of a certain age.

Late for work and dodging traffic, Eliza's still reeling from the latest row with her husband Paddy. Twenty-something years ago their eyes met over the class divide in oh-so-cool Britpop London, but these days their eyes only meet to bicker over the three-seat sofa.

Paddy seems content filling his downtime with canal boats and cricket, but Eliza craves the freedom and excitement of her youth. Being fifty feels far too close to pensionable, their three teenage children are growing up fast, and even the dog has upped and died. Something is going to have to change—menopause be damned!

Woman of a Certain Rage is a smart and funny novel for all the women who won't be told it's too late to shake things up, and Eliza is a heroine many will recognise. She may sweat a lot and need a wee all the time, but she has something to prove. 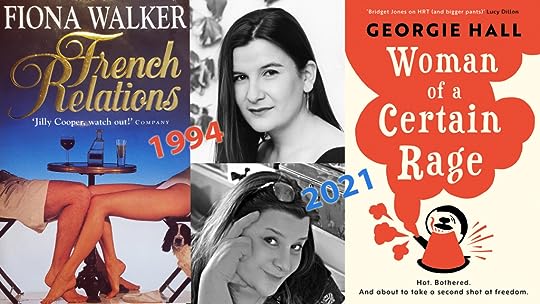 Fiona Walker/Georgie Hall is the author of eighteen novels, from tales of flat-shares and clubbing in nineties London to today’s romping, rural romances set amid shires, spires and stiles.  In a career spanning over two decades, she’s grown up alongside her readers, never losing her wickedly well-observed take on life, lust and the British in love.

Fiona lives in Warwickshire, sharing a slice of Shakespeare Country with her partner Sam, their two daughters and a menagerie of animals.

Posted by LindyLouMac at 4:22 PM