One Hundred Names by Cecelia Ahern 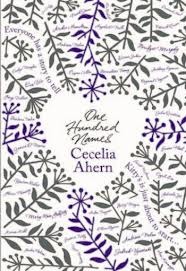 Hardback:  327 pages.
Genre: Contemporary Fiction.
Publisher:  Harper Collins 2012
Source:  Tywyn Public Library, Wales.
First Sentences: She was nicknamed The Graveyard. Any secret, any piece of confidential information, personal or otherwise, that went in never, ever came back out.
Favourite Quote: "Every single ordinary person has an extraordinary story."
Review Quote: ‘An exquisitely crafted and poignant tale about finding the beauty that lies within the ordinary. Make space for it in your life.’ Heat
My Opinion: The idea behind the names is a good one but I did find it rather fragmented.

Having only previously read two of Cecelia Ahern's novels I cannot say that I am a particular fan of hers as she has written I believe fifteen at least. The two I had already read are probably her most famous ones, P.S. I Love You, first published over ten years ago and which I liked. A few years later I read Thanks For The Memories which I was very disappointed with. You must be asking why I decided to read this then, well against all I say about never judging a book by it's cover, this is exactly what I did! The cover of the edition I borrowed from the library is covered in names and it was these names that intrigued me. The idea behind the names is a good one but I did find it rather fragmented although the author does manage to link it all together eventually.

A brief précis of the story without spoiling it for you is that Kitty Logan, the female protagonist that I did not feel sympathetic towards at all, is a journalist that has had her career destroyed by scandal. She seriously needs to sort her attitude out and I think her mentor knew this as she rescues Kitty from her downward spiral. Constance is Kitty's mentor and friend and as she faces her death due to a terminal illness, she sets the young woman a task to write a story that she herself never had a chance to complete. This is where the list of names from the cover come into play as Kitty tries to solve the mystery her friend has left her to turn into an article. It is a daunting task and one that teaches her a few things about herself, but to find out if she succeeds you will have to read for yourself.

In conclusion then I am glad the cover attracted me enough to want to read this and it was a pleasant read. Recommended to those looking for contemporary fiction that is will uplift your spirits as you discover that "Every single ordinary person has an extraordinary story."

Cecelia Ahern was born on September 30, 1981 in Dublin, Ireland. She is the daughter of the former prime minister  Bertie Ahern. On 14th December 2009 it was announced that Cecelia had given birth to her first child with partner David Keoghan, a girl named Robin. The couple secretly married on 11 June 2010 in County Kildare, Ireland. Her older sister, Georgina Ahern is married to Nicky Byrne of Irish pop group Westlife. Cecelia also has a musical background and was a member of the Irish pop group Shimma. She attended Griffith College Dublin and obtained a degree in Journalism and Media Communications. Cecelia Ahern wrote her first novel, PS. I Love You when she was twenty-one. It was published in 2004, the number 1 bestseller in Ireland for 19 weeks and sold in over forty countries. The book was adapted as a motion picture directed by Richard LaGravenese and starring Hilary Swank and Gerard Butler and released in 2007 in the United States.  For a full list of her publications please visit the link I have included below.

Posted by LindyLouMac at 9:29 PM