Her Fearful Symmetry by Audrey Niffenegger

I read Niffenegger's first novel The Time Traveler’s Wife before I started LindyLouMac’s Book Reviews and although it became one of my favourite novels, I never wrote more than a paragraph about it Bookcrossing Journal Entry.I was not used to writing reviews then and found it impossible to write anything worthwhile without it containing spoilers. However I did comment that you need to read it with an open mind and it is the same case with Her Fearful Symmetry.

Lets hope that I can do better this time. This is another very imaginative storyline but surrounded by reality and I think I enjoyed it. An odd thing to say but I did find some of the story difficult to cope with, due to the unethical behaviour of one of the characters which I found disturbing! I obviously cannot say more, if you have read this you will probably guess what I am referring to, if you haven’t well read the book to find out. Let me know what your thoughts were, I am interested, would you behave like that given the unlikely opportunity?

A haunting love story centred around two sets of Noblin family twins, Edie and Elspeth and the younger generation Julia and Valentina. Elspeth is estranged from her twin so when she dies she leaves her estate to the young girls. The main condition of the will is that they leave there home the other side of the Atlantic and live in the London flat for a year. Julia and Valentina much to their parents dismay were keen to take up this opportunity. The move to the apartment in Vautravers a house with direct access to Highgate Cemetery brings them into contact with not only Elspeth’s neighbours, Robert and Martin but the ‘afterlife’. Robert was Elspeth’s lover and he at first finds the twins resemblance to her very difficult to cope with. The other resident is Martin who suffers so badly from Obsessive Compulsive Disorder that he no longer leaves his flat. The girls learn to find their way around London, explore Highgate Cemetery and both befriend one of the neighbours each as one of them starts to want independence from the other one. Highgate Cemetery features strongly in the novel and the facts you learn about it are very interesting, so I guess this has increased tourist visits there. 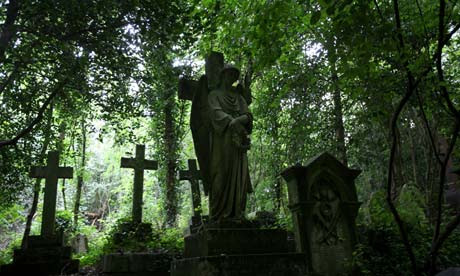 Highgate Cemetery . Photo courtesy of savidgereads from his review.

The afterlife aspect of the story is the central theme as we discover the history of this family of twin identities and it is dealt with by the author in the same matter of fact way that she wrote about ‘time travel’. Unfortunately like so many other reviewers I was rather disappointed with the ending, but I suppose it was difficult to end it other way when you think about it.

Whether you believe in ghosts or not I recommend you read this, if you can cope with the ‘afterlife’ aspect as Audrey Niffenegger has once again produced a novel that is unique (I think, unless you know differently) in its storyline.

Also did anyone else appreciate where the title comes from? The novel's title is inspired by The Tyger by William Blake which begins "Tiger, tiger, burning bright In the forests of the night,  What immortal hand or eye  Could frame thy fearful symmetry?". The poem is mentioned along with a full synopsis of the novel on Wikipedia.

This interview that I found on YouTube is also interesting as Audrey Niffengger explains how the theme of loss and making the most of what we have appears in her novels. 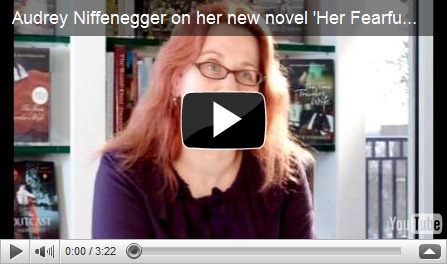 If you are interested in learning more about Audrey Niffenegger and the book she is currently working on visit her Official Website .

Posted by LindyLouMac at 1:03 PM